A member of 2/4th Australian Machine Gun Battalion's 15 Platoon, D Company, Edward was listed as missing from 8 Feb 1942. He had been captured by the Japanese on the west coast of Singapore, but did escape and later rejoined his unit after the surrender. His Singapore POW Number was 3/8489. 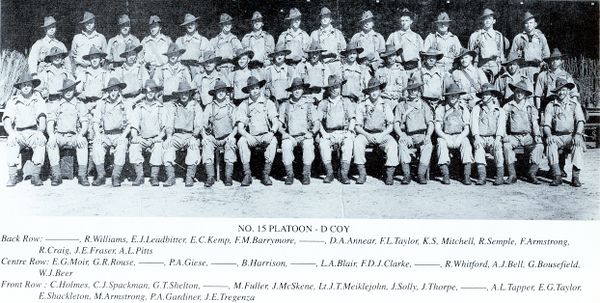 Ted's Platoon, with Ted in the back row, 3rd from left

Subsequently he was a member of 'D' Force, V Battalion in Thailand with POW Number 2266. In Thailand he had been suffering with malaria and was delirious. He was kicked and beaten for 30 minutes by the Japanese Engineer Corporal known as the 'Black Cat'. Ted died of Cholera 14 days later on 10 Oct 1943 at Kuii, Thailand, aged 24.