Our Contribution is a place to discover people from the Armadale and Serpentine-Jarrahdale Districts who served in the Great War 1914-1918.
So far there are 2,511 articles and this number is growing as more information becomes available. If you would like to make a contribution or correct some facts then please contact us

View alphabetical listings of all soldiers, nurses, and sailors in the BirtwistleWiki.

Focusing on pre-war life, social groupings, and associated districts these categories help to give a picture of the community. 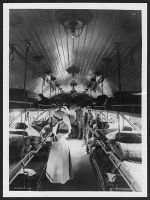 These categories look at life during the war, tracking movements, wounds, and deaths.

Many soldiers travelled together, fought together, and were remembered together.
This is a great starting place to look at the interactions between soldiers.

Aboriginal and Torres Strait Islander people should be aware that this website may contain images, voices or names of deceased persons in photographs, film, audio recordings or printed material.

Original owner was the Aberdeen Line, later sold to the Shaw, Saville & Albion Line for routes to Melbourne, Australia via Cape Town. She could carry 250 third class passengers, and 100 in first class. The trip to Melbourne took 40 days.

Served during WW1 as a troopship under the control of the Commonwealth until 20 Oct 1917 before being transferred to the British Admiralty. While controlled by the Transport Branch of the Australian Navy she undertook 7 journeys with troops from Australia to either Egypt or England.

During WW2 the Themistocles was used on trans Atlantic convoys. Between the wars and after WW2 she returned to servicing the Australian route making a total of 79 voyages to Australia during her lifetime. She was laid up at the end of June 1947, and scraped on 24 Aug 1947 at Dalmuir.

Some troops joined ship much earlier than the day she sailed.