Enlisted at the Claremont Recruit Reception Depot and ten days later on 16 Aug 1940 he transferred to the Melville Training Depot No 1. On 2 Sep 1940 he was moved to the No 3 Depot Battalion at Northam camp, where on 28 Nov 1940 he was taken on the strength of the 2/4th Machine Gun Battalion and allocated to 'A' Company.

In Adelaide Bert's tussle with authority continued, being AWOL from 8:30am on 2 Sep until 8:00pm the same day. Awarded 4 days Confined to Barracks (CB) and forfeited the days pay. Also charged the same day with failing to appear at a place of parade, for which an additional 3 days CB was awarded. Bert was AWOL again from midnight 9 Oct 1941 until 10:00pm on 10 Oct 1941, for which he was punished with 7 days Confined to Barracks. On 11 Oct 1941 he entrained in Adelaide for Darwin, arriving there on 20 Oct 1941. 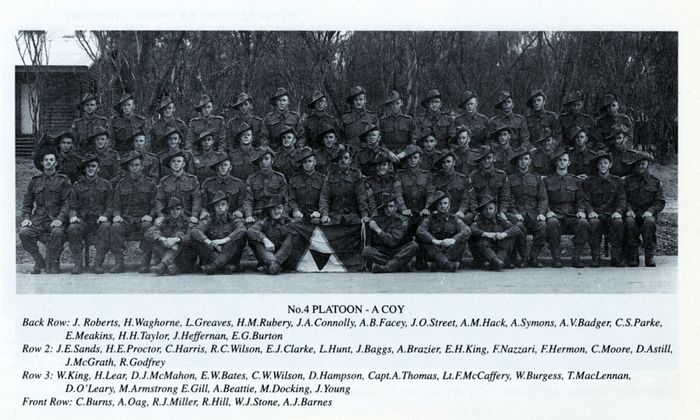 The 2/4th Machine Gun Battalion boarded HMT Aquitania on 30 Dec 1941 for Port Moresby (actual destination was Singapore). Due to Japanese activity north of Papua, it was decided to send the convoy carrying the 2/4th Machine Gun Battalion via Sydney and Fremantle. In Fremantle Bert was again AWOL, one of many who refused to accept that after six months absence they could not see their families before sailing to the war. On board ship on 18 Jan 1942 he was charged with the AWOL offence (2:00pm on 15 Jan until mid day the next day) and was fined £2. The battalion disembarked in Singapore on 24 Jan 1942.

Bert was declared Missing in Action on 16 Feb 1942, the day after Singapore fell to the Japanese. Bert had been admitted to the 2/13th Australian General Hospital in Changi on 19 Oct 1942, before being returned to his unit on 27 Oct 1942. He was again admitted to the hospital on 13 Feb 1943, with dysentery, and that he died on 23 Feb 1943 with his death caused by Dysentery, Pneumonia, and Toxemia. During April 1945 news reached Australia that he had died while in captivity.