Ralph enlisted at the Claremont Recruit Reception Depot and was sent to the Melville camp to join the No 1 Training Battalion. On 2 Sep 1940 he was moved to Northam camp, and the 13th Depot Battalion for training. There, on 27 Nov 1940 he was posted to the 2/4th Australian Machine Gun Battalion. He was granted leave from 1 to 11 Jul 1941 prior to the unit moving to Adelaide aboard HMT Duntroon, departing Fremantle on 21 Jul 1941 and arriving in Adelaide on 25 Jul 1941.

Following more training, on 2 Oct 1941 Ralph entrained in Adelaide for Perth, arriving on 4 Oct 1941. Sent to the Claremont camp, and then on 7 Oct 1941 to the Northam camp where he joined the 3rd Training Battalion before being posted to the reinforcements for the 2/16th Australian Infantry Battalion. Granted pre-embarkation leave from 15 to 21 Oct 1941, he embarked on HMT Queen Elizabeth at Fremantle on 7 Nov 1941. Along with HMT Queen Mary, HMT Queen Elizabeth formed convoy code named US13. They disembarked at Port Suez on 22 Nov 1941.

Ralph, on arrival in Egypt, was sent to the 21st Australian Infantry Training Battalion before being posted to the 2/14th Australian Infantry Battalion on 19 Jan 1942. His unit was performing Garrison duties in Lebanon when he joined them. Barely had he joined them, then they embarked on the SS Île de France on 29 Jan 1942 for Australia. Transhipped at Bombay, on 24 Mar 1942 they disembarked at Adelaide from the SS City of Paris. On 16 Jul 1942 Ralph was charged with drunkenness, and he was admonished by his Commanding Officer.

On 6 Aug 1942 he and his unit boarded the SS James Wilson in Brisbane for Port Moresby which they reached on 12 Aug 1942. The 2/14th Battalion were part of the force that pursued the Japanese back up the Kokoda track, and participated in actions around Gona. On 14 Dec 1942 he was evacuated to the 2/9th Australian General Hospital and passed on to the 6th Casualty Clearing Station on ! Jan 1943 with suspected malaria. He was evacuated to Australia on 7 Jan 1943, arriving there on 10 Jan 1943, and was then placed on an Ambulance Train for the 117th Australian General Hospital at Toowoomba which he reached on 13 Jan 1943. Four days later he was released to the 102nd Australian Convalescent Depot at Warwick in Queensland. By the end of January he was well enough to transfer to the Ascot Staging Camp in Brisbane, where he was granted leave from 11 until 25 Feb 1943. Ralph was able to rejoin his unit on 20 Mar 1943.

On 19 Apr 1943 Ralph was transferred to the HQ 21st Australian Infantry Brigade in north Queensland, and following further training, during which time he qualified for Proficiency pay, he and his unit boarded HMT Duntroon at Townsville on 31 Jul 1943 for Port Moresby, arriving on 2 Aug 1943. On 15 Feb 1944 he boarded the SS Canberra for the return journey to Townsville, arriving there on 18 Feb 1944. On arrival they were granted home leave during which time Ralph entered the 110th Australian Base Hospital in Perth with malaria on 31 Mar 1944. On 7 Apr 1944 he was transferred to the 118th Australian General Hospital at Northam, remaining with them until 28 Apr 1944 when he was fit to return to his unit in north Queensland. Ralph suffered another malaria attack on 12 Jul 1944 and was evacuated by the 105th Australian Casualty Clearing Station to the 7th Australian Division Rest Camp on 17 Jul 1944, again returning to his unit soon after.

Ralph and his unit boarded USS General Anderson in Townsville on 2 Jun 1945 for Morotai, disembarking there on 8 Jun 1945, and on 21 Jun 1945 he boarded HMAS Manoora for Balikpapan where they participated in the landing to engage Japanese troops on Borneo. Balikpapan taken from enemy hands, on 26 Sep 1945 they embarked on HMAS Gascoyne for service with "MakForce" at Makassar, and on 22 Nov 1945 with their task completed they boarded HMAS Gascoyne at Makassar for the return to Balikpapan, disembarking on 23 Nov 1945. Soon after Ralph travelled to Singapore where on 3 Dec 1945 he embarked on the HMT Moreton Bay for Sydney, arriving there on 19 Dec 1945. Ralph was discharged in WA on 16 Jan 1946. 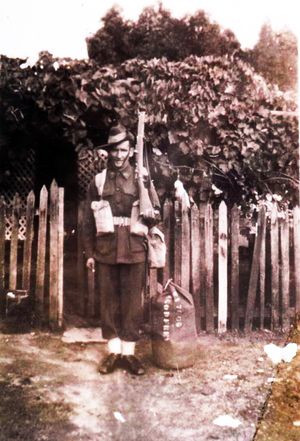