On 2 May 1941 Stan enlisted in the AIF at the Claremont camp, and on 12 May 1941 he marched out to the 1st Training Battalion at the Northam camp. Basic training completed he was allocated to the 2nd Reinforcements for the 2/32nd Battalion on 10 Jun 1941, and from 28 Jun until 4 Jul 1941 he was granted pre-embarkation leave. On 9 Sep 1941 he proceeded overseas on HMT Queen Mary a part of Convoy US 12A, and on 15 September they arrived at Trincomalee, Ceylon (Sri Lanka) where they stayed overnight before departing for Suez the next morning where Stan disembarked on 23 Sep 1941.

On arrival he was sent to the 25th Australian Infantry Training Battalion, and on 15 Nov 1941 he transferred to the 24th Australian Infantry Training Battalion, and then on 30 Dec 1941 to the 2/32nd Australian Infantry Battalion which was in Khassa, Palestine, rebuilding and training. In July 1942 with the Germans and Italians threatening Alexandria, the battalion was rushed to join the allied forces in western Egypt. The 2/32nd Battalion participated in the attack on Ruin Ridge on 17 Jul 1942, and faced strong German counter attacks, such that they lost nearly a half of their men killed or wounded, and nearly another 200 became POWs. Stan seems to have survived this, and would have enjoyed the battalion being moved back from the front line to rebuild, during which time he participated from 18 Sep until 9 Oct 1942 in a 9th Division Machine Gun School. The 2/32nd Battalion was to play a part in the secondary attacks in the Battle of Alamein on 31 Oct 1942 in the "Saucer" where the heaviest fighting occurred. Following the battle they returned to Palestine as Garrison troops.

With the withdrawal of all Australian troops as demanded by Prime Minister Curtin, the 2/32nd Battalion embarked on 24 Jan 1943 aboard HMT Queen Mary at Suez, and disembarking in Fremantle on 18 Feb 1943 before enjoying 3 weeks leave. Soon after arriving he was admitted to the 37th Australian Camp Hospital with Vincent's Angina for several days. He then journeyed by train to Adelaide from where the battalion moved to north Queensland to prepare for service in Papua New Guinea. Prior to embarking for new Guinea he qualified for Proficiency Pay on 1 Jul 1943. On 7 Aug 1943 the 2/32nd Battalion embarked on SS Charles P Steinmetz in Townsville for Port Moresby. Stan and his unit participated in the amphibious landing at Red Beach, north west of Lae, and then participated in the second phase of the attack on Lae. Following its fall they landed on Scarlet Beach north of Finschhafen, and defended the area against Japanese counter attacks. Between 13 and 16 Nov 1943 Stan was treated by the 2/3rd Australian Casualty Clearing Station for acute myofascial pain. Advancing inland the 2/32nd captured Pino and then Pabu on 20 Nov 1943. They fought off savage Japanese counter attacks between 22 and 25 Nov 1943, and advanced to Christmas Hill on 10 Dec 1943 before being relieved two days later. On 31 Jan 1944 the unit embarked on SS Andrew D White at Finschhafen, disembarking at Townsville on 7 Feb 1944 where they were sent home on leave. Stan enjoyed 24 days leave in Kalgoorlie from 19 Feb 1944.

During Stan's leave he presented to the 110th Australian Base Hospital in Perth and was cared for by them from 5 - 9 Mar 1944, where his medical classification changed to 'B2', necessitating a change of unit and role and so on his return to duty he was sent to the 13th Australian Staging Camp at Oonoonba, in Townsville. On 1 Nov 1944 he was transferred to the 12th Australian Advanced Ordnance Depot, where on 9 Feb 1945 he suffered second degree burns to the Medial side of his right, lower leg. Hospitalised in the 2/14th Australian General Hospital until he could rejoin his unit on 24 Feb 1945. However, on 18 Mar 1945 Stan was transferred to the Western Command Recruit Reception & General Details Depot for discharge, and on 4 Apr 1945 he began the travel home to WA. Stan was discharged on 12 Apr 1945 on medical grounds.

From 14 Jun to 23 Jul 1948 Stan worked for the Western Australian Government railways as a trainee painter before resigning. He never married. 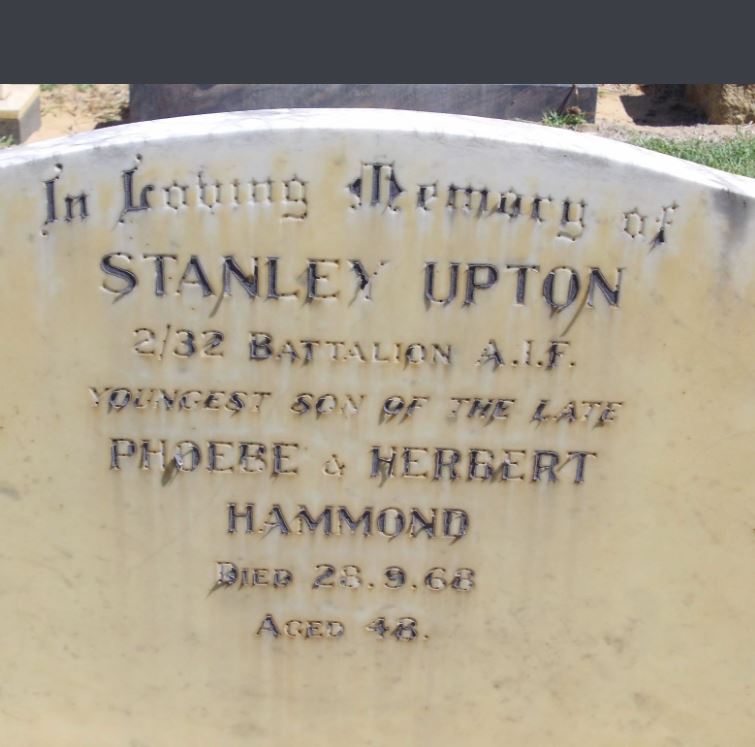